Showing posts from June, 2007
Show all

June 30, 2007
This has to be the wettest June on record, I've never known so much water to fall from the sky in the middle of the UK summer. Global warming? Has to be - after all, if all that ice is melting, water levels presumably rise, but also more evaporates, due to the higher temperatures. And all that moisture in the atmosphere has got to come down at some point. Mostly over the UK, it seems..... 8-(
1 comment
Read more

June 29, 2007
I really mustn't - because it really is a very cool piece of design, however you slice it up. But that huge touchscreen - maybe all prospective buyers should have a play with the free iSmudginator before parting with their money - fun and thought provoking at the same time!!!
Post a Comment
Read more

The One Minute Apple iPhone review 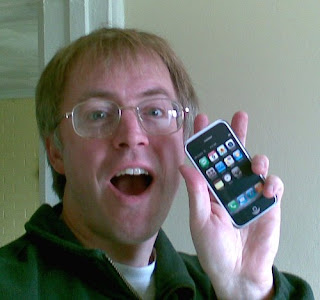 The ever popular Nintendo DS

June 25, 2007
Ah, the humble portable games console that just doesn't want to die. Admittedly the original Nintendo DS was over-large, clunky and with a poor screen, but the DS platform has been kept going in style by the utterly fabulous DS Lite for the last year or two. Even in the face of the Wii and XBox 360 and PS3 in the living room, the sheer private playing experience that is the DS keeps on winning out. Think about it - you're a kid or a teenager - with the DS Lite you can curl up and play in your bedroom, no TV or other kit needed. And, thankfully, at long last the standard and number of game titles appears to be rising. Brothers In Arms, for example, quite staggering on the DS, see my review , though there are just as many really terrible titles, so look at the scores before buying anything! The DS Lite is highly recommended for you and your kids, and no I don't have any shares in Nintendo!
2 comments
Read more

June 04, 2007
Like many others, my Windows XP box is starting to show signs of wear and tear and the reality of needing a new PC at some point in the next few months is starting to hit home. Yet I'm really not convinced by Windows Vista. And yes, I've read all the reviews and articles. To my mind, Vista is yet another example of Windows getting more and more bloated and of eye candy getting in the way of just 'getting the job done' (TM). There's no way in hell I'm upgrading any of our XP devices to Vista and I'm fighting to find a well-priced replacement device that doesn't come with Vista pre-loaded... I just know that all sorts of accessories and utilities simply won't work under the new OS, however many 'compatibility' layers Windows Vista now has. Or... I could buy a Mac. Now THERE'S a thought. Watch this space.
1 comment
Read more

June 03, 2007
With a little luck, I'll be moving house in the next few weeks.... I'd always assumed that what people said about estate agents must have been exageration, but I've been rather dismayed by some of the attitudes and (lack of) actions I experienced recently. Anyway, I've started jotting down my own thoughts on the whole process of moving house and dishing out tips and wisdom for others.
Post a Comment
Read more
More posts