September 18, 2019
As many of you know, I'm into my audio, and have been fighting the removal of the 3.5mm audio jack from smartphones in recent years. However, well over half of modern flagships have now dropped the jack (I'm still blaming Apple for starting the fashion!), so it's something I'm just going to have to work around if I want wired audio, i.e. zero latency, no recharging needed, maximum quality music and soundtracks.

Which means investigating USB Type C to 3.5mm adapters. And not just 'dumb' adapters (typically a few quid on eBay), which are only suitable for phones that support analogue audio output via spare pins on the Tye C connector. But principally 'proper' adapters, with a built-in DAC (Digital to Analog Converter), which take digital audio and render it to analogue audio waveforms for putting through headphone earpieces. These DAC-dongles are typically £12 or so, usually supplied in the box by a manufacturer or available on their web site, but you can also buy them on the third party market. 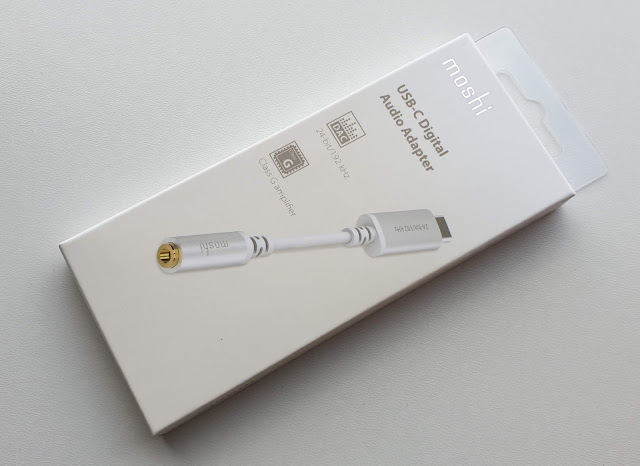 And this is what we have here, from Moshi, high end accessory providers, at £25 in the UK, so twice the price of the Google version that ships in the Pixel 3 boxes, for example. But is it worth paying twice the price?

First impressions are very positive, this is much, much sturdier and better made than the Google offering. Aluminium casings on both connectors, plus very strong strain relief mouldings, this feels as if it will last a lifetime and not break after a year of use. 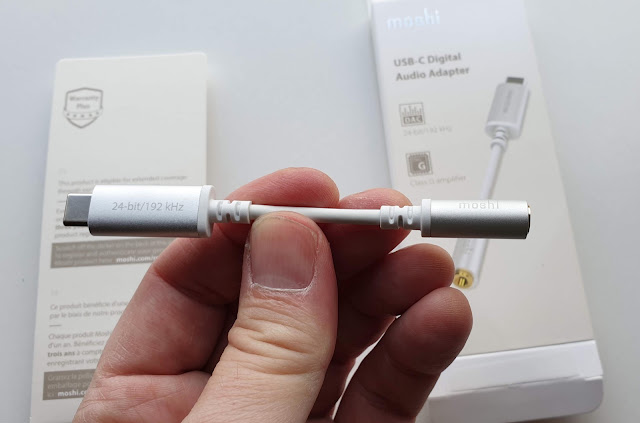 Embossed on one end is "24 bit/192kHz", emphasising that the DAC chippery inside is of high quality and capability: 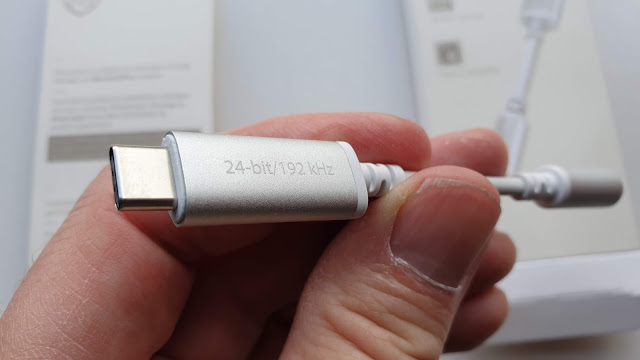 So far so good then. And I'd happily pay twice the price for something that's built three times as well.

The Moshi engineers say that 'the adapter is firmware-upgradable', though they don't say how. Still, the facility to one day update this through a Windows utility (probably) is handy.

Now to the acid test. Trying these with a Pixel 3 XL and some remastered Pink Floyd(!), I went backwards and forwards between the Moshi accessory and the Google in-box one.

I should declare that though I love good audio, my ears are over 50 years old and therefore there must be some loss at the top end (over 10kHz). Making the '192kHz' sample rate quoted here a little irrelevant - as a rule of thumb, you should half the sample rate to get a practical maximum in rendered music. Though I'd doubt that even a child could hear 96kHz frequencies!

So I was more interested in fidelity at other frequencies, at stereo separation, and in overall volume in the ears. The Moshi adapter had very slightly better fidelity and separation BUT lower volume on all test headphones (I tried in-ear and over-ear reference), by about 20%.

Which is odd, for a third party DAC to come in quieter than a manufacturer one. I asked Moshi why this was and apparently it's all to do with the EU laws:


Since we are certified and sell globally, we must follow the EN50331 SPL standard (EU regulation) which ensures the volume output is limited protect user's hearing. We have tuned the power output to 30 mW per channel @ 32 ohms which is the same as Google's.

Gah. Not the same as Google's, to my ears, but I get the idea.

Now, to be fair, at maximum volume there was sufficient 'oomph' for me, but with no headroom should I want more (for example, for a quiet piece when listening on the move).

However, I can't leave the review there without at least a mention of the overall best product in this category, and the one I use day to day. You see, throw off the namby pamby EU restrictions and you get this, the HIDIZS Sonata Mk II, reviewed by me here, which are currently £43 on Amazon UK, which offer full, unrestricted volume output with even better fidelity to boot. 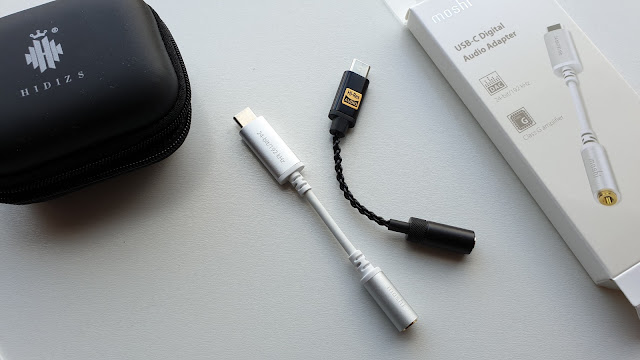 Shown above is the HIDIZS accessory next to the Moshi one. The HIDIZS DAC has metal casings, but a much weedier connecting cable, for comparison.

The HIDIZS DAC adapter is also nearly twice the price, but for me it's still the Rolls Royce of the genre in terms of what I hear in my ears. And yes, this is firmware-updateable too.

Plenty of choice and a continuum of options. Comments welcome! 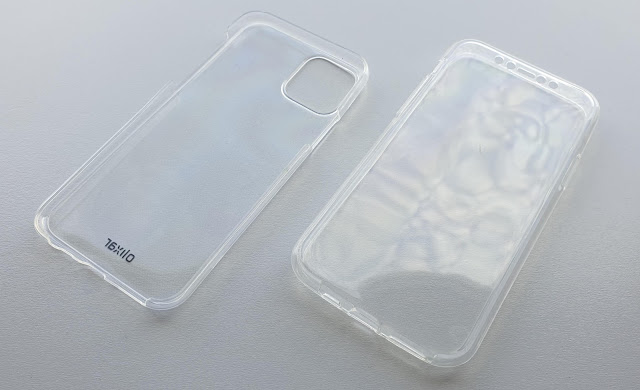